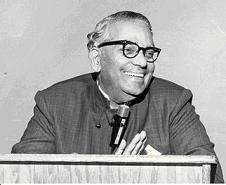 The image above came from the Sripati Chandrasekhar Papers at the Ward M. Canaday Center, University of Toledo.

Dr. S. Chandrasekhar, leading demographer and former Union Minister for Health and Family Planning, died at San Diego, United States, on June 14. A pioneering family planning advocate in the area of public policy, he was the author of over 40 books and was working on a book till he suffered a stroke and was hospitalized three months ago. He is survived by his wife Anne, and three daughters, Radha, Prema and Sheila.After completing his M.Sc. from Columbia University and his Ph.D. in demography in New York University, Dr. Chandrasekhar became professor of Economics at Annamalai University, where he later served as Vice-Chancellor. He started the Indian Institute of Population Studies, and edited the academic journal, `Population Review’, for over 40 years. He was elected to the Rajya Sabha in 1964 and in 1967 he was appointed Minister for Health and Family Planning in the Government of Indira Gandhi. He came to be known for his crusading zeal for family planning and population control.He served as a professor in several American universities including the University of Pennsylvania and the University of California (at Los Angeles and at Santa Bentan) and had lectured extensively on the subject of population studies. His books include `Population and Planned Parenthood in India’, `Hungry People and Empty Hands’, `Red China’ and a series on Indian emigration to different parts of the world.

Sripati Chandrasekhar, an Indian demographer and government minister who fought a tireless and so far losing battle to reduce his country’s soaring population, died on June 14 in San Diego, Calif. He was 83. He died after two strokes, his wife, Ann Downes Chandrasekhar, said.Dr. Chandrasekhar lived mainly in La Jolla, a section of San Diego, and southern India, but roamed the world teaching and preaching his message that ever more Indians living ever longer lives meant disaster. He urged sterilization for men, easy abortions for women and a voluntary year with no sex for married couples. From his perspective, too few people followed his advice. As China reined in the growth of its population, India’s has grown from 340 million people at independence in 1947 to more than a billion. It is on course to surpass China’s population, now 1.27 billion, by the middle of this century. “He felt sadness and regret,” his wife, said. In 1967, when India’s population was 500 million, Dr. Chandrasekhar warned of dire consequences if the total reached even 600 million. In an interview in U.S. World Report, he said he feared that India’s government would break down. “The average citizen is going to face absolute misery,” he said.”Food supply will dwindle. There will be no living space. We will be reduced to the level of a cabbage patch.” Dr. Chandrasekhar said he feared that India would turn to Communism because of overpopulation and poverty. The Indian government now classifies more than 250 million of its citizens, about a quarter of its population, as desperately poor. The number of children an Indian woman bears has fallen from six to three since 1950, but this trend has been counterbalanced by longer life spans. That means that population growth, rather than dropping with family size, has persisted, and policies Dr. Chandrasekhar advocated, including applying pressure on men to be voluntarily sterilized, remain topics of fierce debate in India. “Our house is on fire,” Dr. Chandrasekhar said in 1968, when he was India’s minister of health and family planning under Prime Minister Indira Gandhi. With male sterilization, he said, “We can get the blaze under control.” Always, his approach was straightforward. He brought “the moral force of a crusader and the ruthless efficiency of a high-power salesman” to his push for population control, the Indian magazine Yojana said in 1968. Yojana called him a perfectionist “impatient with those who don’t match up to his exacting standards.” He literally regarded no cow as sacred, enraging Hindu militants in the 1960’s by urging Indians to eat beef. A militant Hindu party, Jan Singh, denounced him, saying, “Such an ignorant and offensive person has no business to be a minister.” Obstacles were strewn on the path to population control. Dr. Chandrasekhar battled the custom of very early marriage for Indian women, the opposition of Mohandas K. Gandhi to artificial birth control methods and a governmental policy of relying on the rhythm method for India’s first 10 years of independence. While his battle had many fronts, Dr. Chandrasekhar’s central message could not have been plainer: “The simple sex act must be a responsible act,” he said. Dr. Chandrasekhar, the son of a teacher and author, was born on Nov. 22, 1918. While he was a teenage student at Madras Presidency College, he wrote his first paper on population problems. “From then on, I lived and breathed demography,” he said. He earned his doctorate from New York University in 1944; his dissertation dealt with India’s population problems. Toward the end of World War II, he worked for the American Office of Strategic Services, the forerunner of the Central Intelligence Agency, as an expert on Indian demography. After the war, he lectured throughout the United States on India’s independence struggle. An article in Scientific Monthly in 1946 called him the “unofficial representative and interpreter of India to the United States.” He then lived the life of the writer and academic, writing hundreds of articles and 32 books and teaching at universities in India, the United States and Europe. His books include “Hungry People and Empty Lands,” 1953; “Communist China ‘Today,’ ” 1961, and “American Aid and India’s Economic Development,”1965. A lover of classical music and mystery novels, he sometimes displayed an unabashedly flamboyant side. At the time of his appointment as health minister in 1967, he exuberantly swatted a fly on his desk while being interviewed by a reporter. “Got him!” he whooped. “You can’t have a fly on the health minister’s desk.” In addition to his wife, Dr. Chandrasekhar is survived by his daughters, Radha Ahlstrom of Seattle; Prema Chandrasekhar of southern India; and Sheila Chandrasekhar of Oakland, California.

A Quote by Dr. Chandra: “In the India of my dreams no citizen shall have to beg for his next meal, or sleep on the pavements of our city streets, or live a life of illiterate darkness, or suffer from a curable or preventable disease, or lead a demoralized life of enforced idleness.  The future citizens of this ancient land must have pride in their cultural heritage, feel dignity as valued members of the community and hope for an ever better future of peace and prosperity for their children’s children yet unborn.” From, S. Chandrasekhar, “How India is Tackling Her Population Problem,” Foreign Affairs (New York), October, 1968.